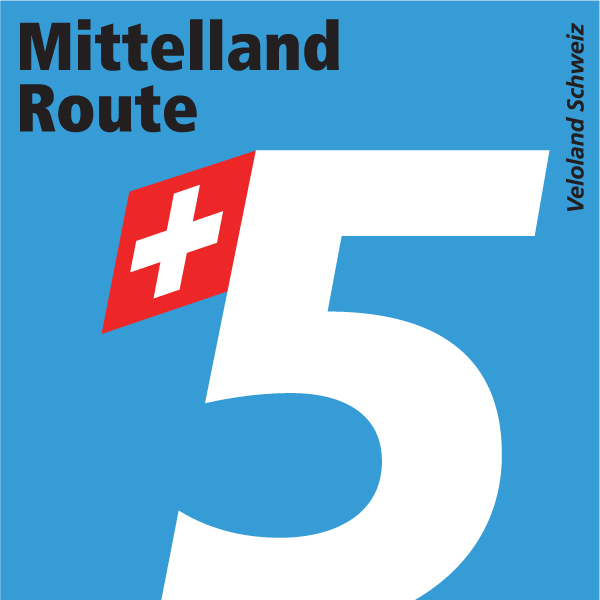 The pleasant ride along the varied Mittelland Route is mostly on traffic-free paths, along lakes and rivers, through wide plains and peaceful valleys, towns and villages, industry and agricultural land.

Surprising insight in to the fascinating everyday life of Switzerland’s Mittelland, an exciting, easy ride on a mostly traffic-free route from Aarau to Lac Léman.

The rolling hills of Oberthurgau: apples and pears in plenty, nearby canning factories to be expected. Motorway construction means that only parts remain of extensive water meadows east of Wil - main city in «Fürstenland».

Useful but unpredictable water from richly forested Tösstal. Culturally and industrially confident Winterthur, a city without airs and graces. Whether with a gentle murmur or a roar, the rut of the «silver birds» announce the arrival of Zurich.

Through the Furttal valley of the Limmat, the bathing spot Baden, and on to marvel at the Gothic stained glass windows in Königsfelden and yellow irises of the River Aare floodplain, followed by a leisurely ride on the Aare dam to Olten.

Past baroque Solothurn along the meandering Aare to Dreiseenland (three lakes country). Just 130 years ago, this landscape was redesigned by man: the lake level lowered and marshes drained. Seeland is now the scene of intense vegetable cultivation..

A pleasant ride throu gh the three lakes country. Just 130 years ago, this landscape was redesigned by man: the lake level lowered and marshes drained. Seeland is now the scene of intense vegetable cultivation.

The little medieval town of Murten on the south-east bank of the lake of the same name has preserved its original appearance, with the picturesque alleyways of the Old Town and the pleasant shady arcades.

From medieval Murten to the small city Avenches. The small town of Avenches lies in the wide Broye Plain between the Lakes of Neuchâtel and Murten in Canton Vaud near the border to Canton Fribourg. This former capital of Roman Helvetia has a rich and valuable heritage from Roman times.

Now back to Lake Neuchatel. chirping in the reeds, waves lapping at the gentle shore, the Jura shimmering in the distance. Over 100 species of birds breed in the Grande Cariçaie, the 40-km-long marsh and reed belt along the southern shores of the lake.

Flat and fertile: die Plaine de l’Orbe, framed by Roman mosaics and the rolling hills of Vaud. In Mormont, the watershed of the Rhone and Rhine. Change of scene from the wild waters of the Venoge to the small silver «sea» of Lac Léman.

The route is mostly flat and leads through the Swiss mittelland. It is perfect for family bike tours with children. Mostly car-free and on natural field- and forest paths.

Explore the area on Google Maps

All data for 2020 at a glance
Place of arrival: Horn

By default, your  travel package includes a set of travel documents, which we will transmit  you in advance. The following documents will inform you about your tour:

If you select the option "digital travel documents" when booking, we will provide you with all documents for your trip in a digital form. You will receive a small set of documents with the following content:

En route  you will inform  yourself easily with the app of SwitzerlandMobility and other free  apps. Background information and all other documents are electronically assigned and can be downloaded to your mobile phone in advance.

Since this option saves resources and costs, a discount of CHF 30.- per room is offered.

This tour has 1 more variation

More tours for you

We use cookies and analytics software to provide you with a better user experience. By continuing to use this website, you consent to our use of these cookies.