Straight into your heart! 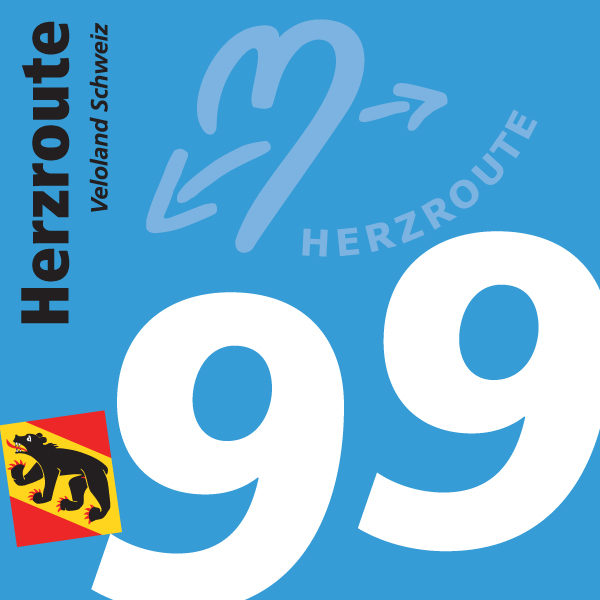 The Herzroute (Heart Route) leads through the most beautiful areas in Switzerland's Alpine foothills. The secluded trails, far from traffic noise and all hustle and bustle, are particularly appealing for exploring by electric bike. The route offers heart-warming encounters with the countryside and people. Gently rolling hills, lush meadows, beautiful forests and wonderful views of the Alps: scenery that will earn a place in your heart – the Herzroute. It wends its way through the chain of the Alpine foothills.

And behind every range of hills is a valley with its own distinctive features just waiting to be explored. The aim of the Herzroute is not directness, but its path. Switzerland as it once was is there to experience at your own pace. It's well worth spending a little time at impressive vantage points. Small hamlets, stately farmsteads and picturesque small towns cater for variety. Electric bikes are recommended to cover this route with ease as it primarily leads through rolling countryside. Points for bike rental and battery changing are found along the route. Strenuous climbs are thus easily mastered so that the Herzroute can be enjoyed by cyclists of all abilities and ages.

From Langnau, the route leads through the peaceful open countryside of the Emmental. The beautiful scenic vantage points are highlights in this primeval Swiss landscape. The historic old town of Burgdorf is the ideal place to round off this eventful excursion.

Soon after Burgdorf, the route disappears into secluded forest sections and sections with magnificent views. Without traffic, you float far above the Mittelland and enjoy the opulence of the landscape. Only in Utzigen you dive back into civilization, but are rewarded with a castle and a restaurant.

Afterwards, you will climb the Mänziwilegg hill, whose vantage point offers views of the city of Bern and far-reaching views as far as Lake Neuchâtel. You will be led back to the Emmental valley via magnificent ridges, where you can visit Lützelflüh, Gotthelf's place of work. A little later you will be back in Burgdorf with its proud fortress above the Emme.

The route takes you into the intimate Emmental hills around Burgdorf, with the cascade of hills known as the "Wynigenberge" being particularly attractive, as they form a vantage point above the Mittelland and repeatedly offer views of the Jura and Alps. Starting from the proud castle town of Burgdorf, you climb over small roads to the vantage point Lueg and after a relaxed descent you arrive at the country inn Ferrenberg.

Magnificent farmhouses and lush green tones will spoil your eyes. After a few more kilometers, the route finds a passage into the flat, where the Emmental extends into the Eben. A final hilly section brings you back to Burgdorf via forest paths, where you enter with a view of the castle.

The eastern loop takes the guest to the "Wynigenberge" this famously situated cascade of hills on the edge of the Mittelland. Here the views pile up towards the Jura and the Alps, here one can experience many highlights that one would hardly have suspected. The "Glungge" from the Gotthelf films or the old tavern "zum Wilden Mann" still fascinate today.

Just after Burgdorf, the route leads through the unique rolling landscape of the Emmental. You are treated to views extending from the Jura to the Alps. On the way to the tiny medieval town of Willisau, impressive inns offer an invitation to take a break.

This section offers wonderful scenery between the historic towns of Willisau, Sempach and Zug. Gently rolling hills, fruit trees and lakes adorn the route. Highlights are provided by attractive chapels as well as breathtaking views of the Alps of Canton Uri.

In Zug the journey begins in the romantic old town. Through charming scenery to Unterägeri. Far above the Aegerisee lake, the route offers impressive views of the mountains. On to the high moor of Rothenturm. The «Chatzenstrick» pass rounds off the stage.

From the highlight of Einsiedeln, the route follows the north shore of the Sihlsee lake. After the steep climb to the highest point of the Herzroute and a fast descent to Zürichsee lake, you reach the tranquillity of the Buechberg forest. Rapperswil welcomes travellers with its southern charm.

Discover the most beautiful e-bike routes in Switzerland on almost traffic-free paths. We recommend taking the tour by electric bike.

Explore the area on Google Maps

All data for 2022 at a glance
Place of arrival: Langnau im Emmental

In future we will reduce the amount of printed documents. You will receive instructions to help you find your way around using the SwitzerlandMobility app.  We will provide you with further information online. In advance you will receive a small package of documents with the following contents:

On the way, you can easily find your way with the SwitzerlandMobility app and other freely accessible aids. Background information and all other documents are delivered electronically and can be downloaded to your mobile phone in advance.

Let us know if you don't want to do without maps. We will send them to you free of charge.

This tour has 4 more variations

More tours for you

Do you still have questions about the tour? We are happy to help and look forward to your inquiry.